This article refers to the address: http://

The MB86R24 improves CPU and GPU performance, processing faster, and rendering images more clearly. It is equipped with 6 full HD input channels and 3 display output channels for greater flexibility in input/output control. Fujitsu uses the new chip to integrate the asymptotic object detection function (which can notify the driver of nearby people, bicycles and other objects) into the 360Â° panoramic 3D video imaging system for the first time in the world, allowing the driver to view the camera from any angle. View the entire environment in a 3D environment.

In addition, the product will introduce an integrated Human Machine Interface (HMI) system that integrates and provides centralized control of a variety of vehicle information. So far, users can see the car information on multiple screens through the product, and each screen can be controlled independently.

The MB86R24 is expected to greatly help improve the safety, comfort and peace of mind of automotive, home and industrial applications, which are increasingly important.

In recent years, there has been more and more attention to the safety performance of automobiles, which can be seen from the Children and Traffic Safety Act promulgated by the United States. At the same time, the demand for automotive systems is increasing. In light of these trends, Fujitsu Semiconductor has introduced the graphics SoC-MB86R24, which can create a 360Â° panoramic 3D video imaging system that can notify the driver of objects close to the vehicle, and an integrated HMI system - connecting people and data from inside and outside the car.

The 360Â° panoramic 3D video imaging system uses a camera facing the front, rear, left, and right to synthesize a 3D model of the environment and then display the surrounding conditions from any angle (Figure 1). Last year, Fujitsu Semiconductor introduced a 360Â° panoramic 3D video imaging system that uses the second-generation MB86R10 series of graphics SoCs and works with megapixel cameras. Because of the increasing popularity of such systems for vehicle surroundings and clear visual confirmation, one would expect more and more additional features to reduce the likelihood of driver negligence while providing a safer and more confident driving environment. 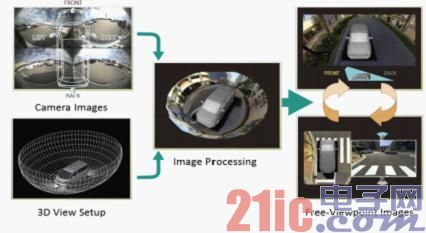 Compared to its predecessor, the second generation, the MB86R24 has twice the CPU performance, while the GPU is five times more powerful, providing clearer images and viewing the environment from any angle. The chip also features asymptotic object detection that informs the driver that nearby objects are approaching the vehicle (Figure 2). The asymptotic object algorithm was developed in conjunction with Fujitsu Labs and implemented as part of a 360Â° panoramic 3D video imaging system, which is the world premiere. 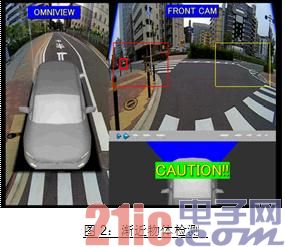 The SoC can also capture input from six cameras simultaneously, enabling greater flexibility in rendering 3D images and enabling the technology to be applied to a wider range of scenes.

In recent years, the amount of information sharing between drivers, vehicles and the outside world has been steadily increasing. This information includes electric car battery information, camera images, navigation information, and connections to smartphones and the cloud. Different information is displayed on different displays, including the center console display, cluster display or head-up display, all of which require display control (Figure 3). How to provide such information to drivers in real time in an easy-to-understand way, we need a technology that can collect information in a single location and centrally control how it is displayed according to the driving environment. The HMI system can do this, and the MB86R24 can control the display of the display to meet the current driving scene information.

In addition, the new SoC facilitates the development of display modules and platforms that can be incorporated into multiple models, rather than requiring a development once in a vehicle model as in the past. This greatly reduces the number of components in the display system, while also facilitating the reuse of products with different vehicle models (Figure 4).

At the same time, Fujitsu also provides the software needed to build these systems. One-stop development of high-performance systems can be accomplished with less effort than ever before.

In addition to the simultaneous 2D engine, 3D engine and video capture capabilities, the new SoC has 8 rendering layers for graphics processing at different levels to meet specific application and content needs.

Plastic technology is the use of thermoplastic polymer materials has the property of state variable, namely with sticky flow under certain conditions, and the characteristics of temperature and recoverable solid, and use the appropriate method and special tools inkjet, according to the requirements on the sticky flow condition into form, for the design and then curing at room temperature. This drip molding process is applied to lamp strings and can be used for many shapes. This type of lamp can be placed outdoors and has an IP44 waterproof rating, which can be made 3D design. The color of light can be white, warm white , colorful, pink, etc. The design can be customized.