The past two years, LED display industry's hottest topic is nothing more than a small dot pitch LED display (High Resolution / High Definition LED Display ). With the decline in LED package prices, the price of small-point spacing LED displays is more approachable. Compared with liquid crystal screen (LCD) or rear projection (DLP), the small-pitch LED display has the following advantages, such as: splicing of any size without stitching, without dimming the ambient light source.

In addition to LEDs, LED driver chips are also an important part for small-pitch LED displays, although many vendors claim that their LED driver chips are designed for small-pitch LED displays, but in fact they Some means still need to be used to cover up some of the defects. The following section will introduce the truth and means of disguising the poor display effect when the small-point spacing LED display adopts an inappropriate driver chip.

In indoor applications, the brightness of the LED display is between 300 and 1000 nits. This brightness is converted into LED forward current, which is about 1~5mA or even less than 1mA. Therefore, the small current concentration of the driving chip becomes important. When the current accuracy of the driving chip is not good, the small-pitch LED display screen is prone to uneven color blocks. However, in order to disguise the color block, the LED current is usually used to increase the brightness of the display. However, the disadvantage is that when the viewer looks at the LED display for a while, the eyes are prone to discomfort. Figure 1 demonstrates the actual difference after re-imaging the image with a small-pitch LED display that uses different quality LED driver chips. 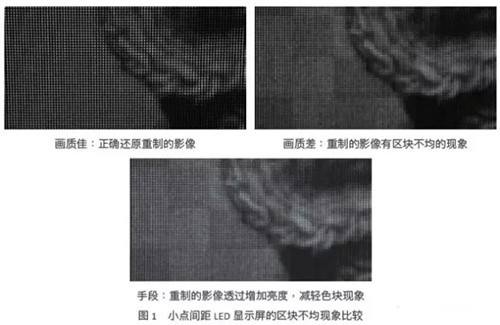 In proportion, the forward current of green and blue LEDs is more affected by parasitic capacitance than red LEDs, so at low gray levels, the small-pitch LED display looks red-tint. It is the color shift we often say, as shown in Figure 2. The correct solution is to use LED driver chips with color-shift compensation instead of masking this shortcoming by increasing the LED forward current. 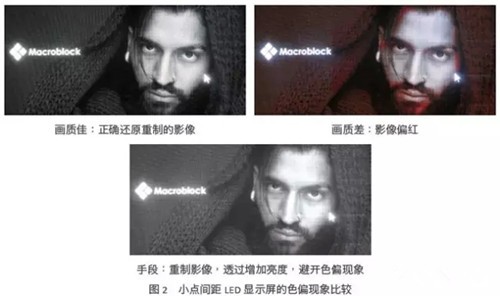 If you do not cover the above shortcomings by increasing the forward current of the LED, another way is to adjust the gamma curve of the LED display with small dots. The brightness of the grayscale is very important for correct image reproduction because of the video source. The medium brightness contains most of the picture data. As shown in Fig. 3, the image on the right has a small gamma value, which means that the brightness of the midtone is too high. Therefore, the overall picture is white and lacks depth, and the detail loss on the image is quite small. Compared with the left picture, the dog hair in the right picture does not. Then there are levels.